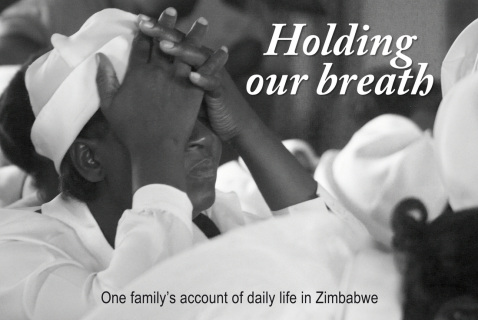 £5.95
Add to Cart
Compiled and edited by Zoe Speariett
Photographs by Kenwyn Pierce and Zoe Speariett
Cover design and layout by Nathan Ward

From the editor:
While working as a sub-editor and writer for the international charity, Council for World Mission in 2009, I telephoned Lucky, (who had been involved in CWM's work through her own church in Zimbabwe), to get some firsthand information on how the political unrest was affecting people there.
The previous year had been particularly hard following the March 2008 elections when Robert Mugabe was controversially re-elected. Famine had gripped the nation and families were starving.

After our conversation, Lucky agreed that I could call her regularly to keep up to date with what was happening in Zimbabwe and how it was affecting her life and her church. The phone calls continued more or less every week for two years, enabling me with her permission, to record her accounts as blog entries on the CWM website.

During that time, I also began speaking to her husband, Zira, when she wasn't there to answer the phone, and he gave me his own insights into daily family life in a country going through turmoil and collapse.

Their words give us an important and very personal account of life in Zimbabwe beyond the headlines; and their resilience and the strength of their faith - despite everything - is an inspiration.

From the Back Cover:
They are a husband and wife, from Zimbabwe. They have two sons. He has lost his eyesight. She has battled to provide for her family throughout the political turmoil that has ravaged their country and their home under Robert Mugabe's rule. But through it all, they have clung to their Christian faith - together.

This book is made up of frank, sometimes heartbreaking and often uplifting extracts taken from a two-year long blog written by this Harare couple. Their entries reveal the couple's fragility, their strength, their fears for their children and their joy over silly things like a burst water pipe that brings water amidst a drought.